AirPods in the Android world

AirPods in the Android world…

Gradually, and this will have to break the habit, since Xiaomi, for example, has already announced about the planned price increase its future smartphones and the rejection of promotions and discounts.

But today we are not talking about smartphones, but about the accessory, wireless headphones Honor FlyPods , presented at the end of October 2018, along with the flagship Honor Magic 2 .

These are truly the first worthy competitors of the Apple AirPods. Xiaomi also has something to show, but this is not the case, as everyone has gags, which I, for example, hate. I am sure I have someone to support.

FlyPods are inserts in three colors: white, red and mint. Chinese resources like Pandao still sell the blue version, but they were not available at the official presentation.

In the bright box you can find separate headphones, case for transportation and charge, as well as Type-C wire. That’s right, microUSB is not delivered, we will write down a plus.

The case, like the headphones, is made of glossy plastic, prints are collected with a bang, especially noticeable on the color versions, so I advise the white one. And for the most true connoisseurs on the Chinese sites already offer silicone covers for protection .

On the case itself there is only the inscription Honor. Above it are four diodes, notifying the charge. Inside one more, is responsible for earphones. 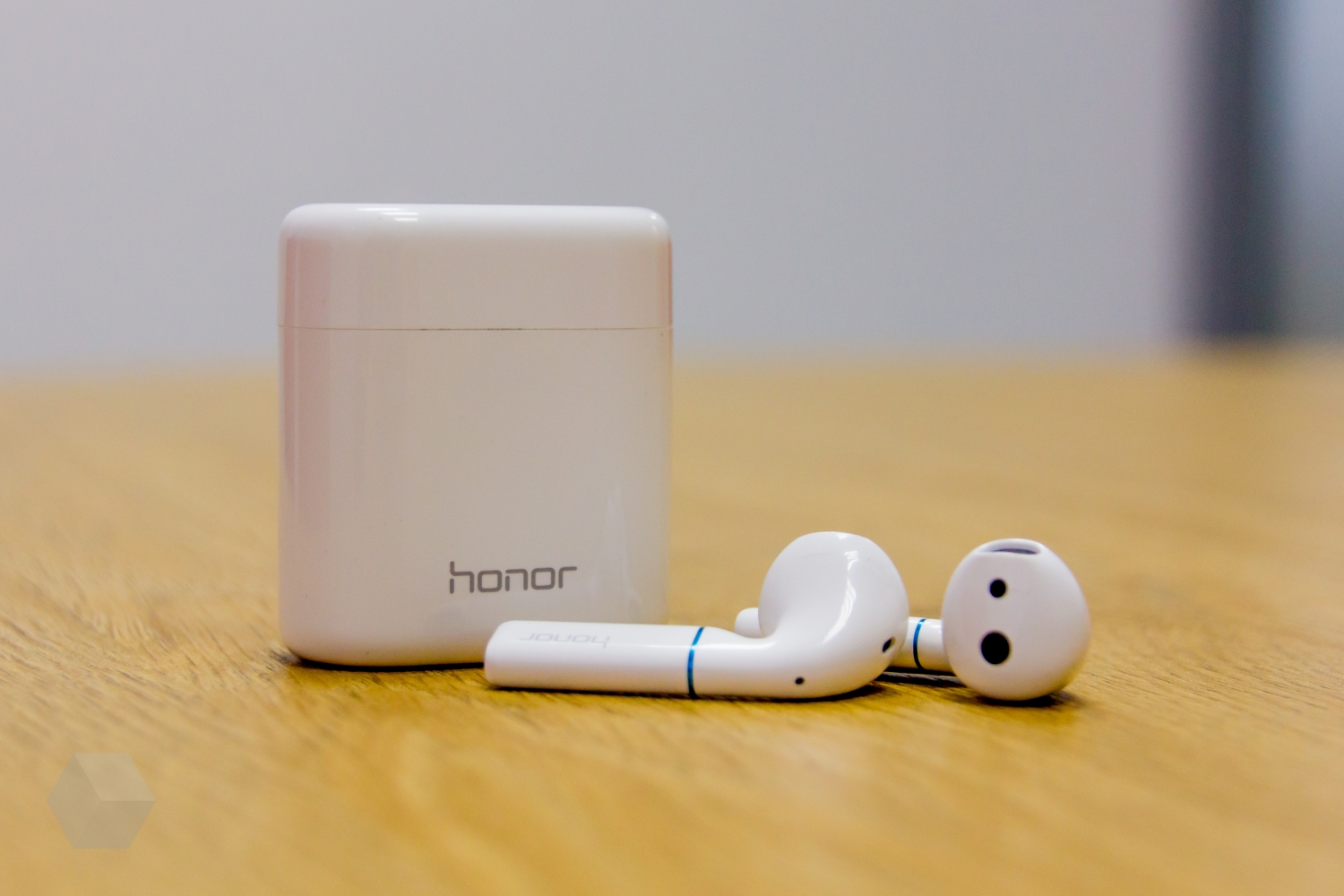 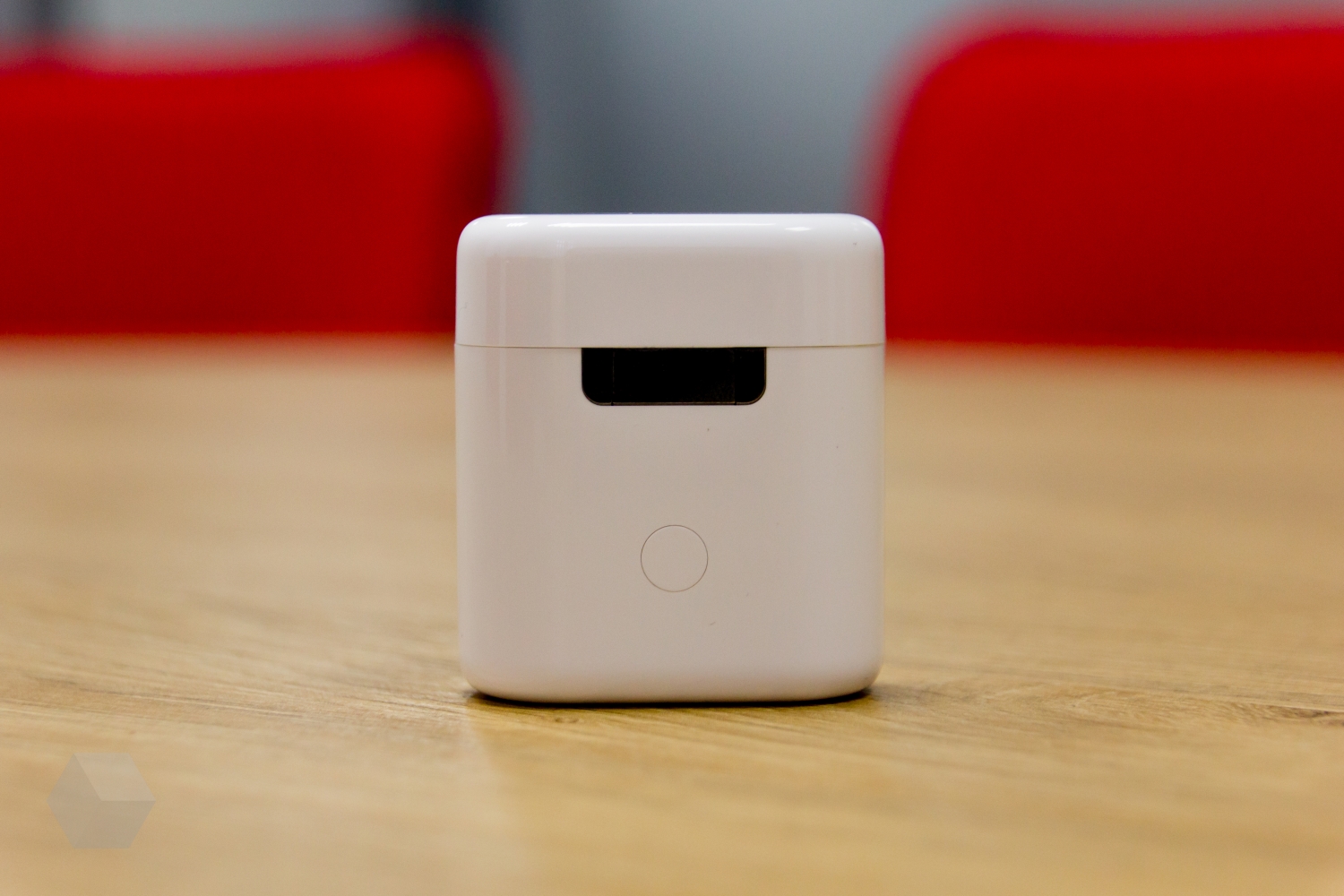 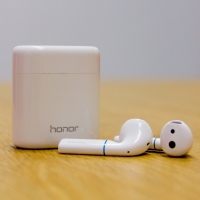 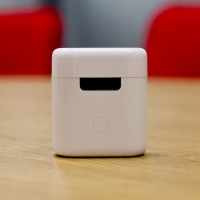 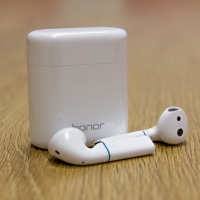 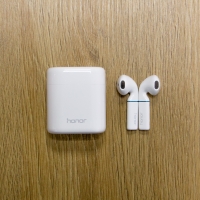 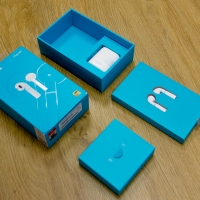 The headphone design was inspired by the swans, so they have a bend under the bowl (supposedly the swan’s neck) and they are inserted into the “face” case to each other.

The foot of each headphone is decorated with a colored rim and brand name. Contacts for charge on the bottom. Protected against splashing and dusting in accordance with IP54.

The first connection and management

FlyPods can be connected to devices on iOS and Android. To do this, open the case and hold the button in the back until the notification diode flashes white. Next, find the device in the smartphone and connect. Headphones got the latest standard Bluetooth 5.0. After the first setting, in the future, the accessory will automatically connect to your device.

If you have the latest version of Android, then in the connection menu you can see the charge of the headphones battery. If this is not the case, look at the diode in the case: green – charge over 80%, orange – 20-80%, red – less than 20%.

The edges of the headphones are sensory, there are some chips from AirPods. For example, when watching a video, you should remove one earphone and playback will stop, but it will not resume when the earphone returns to its place.

A double tap on the right ear will turn on or off the playback, on the left – it will start the voice assistant. You can not switch tracks, as well as configure commands. Perhaps this will appear in the future, as is the charge display on Huawei and Honor AirPods smartphones on the iPhone. At least the screenshots of the flagships promise this.

We approach the most important point and immediately answer the main question – no, individually, both headphones do not work. You can use the left separately from the right, but not vice versa. That is the main ear – the left. And here is a surprise! The sound quality is noticeably worse in the left ear than in the right.

Well, you shouldn’t expect any quality wow effect from such headphones. For audio transmission, SBC and AAC codecs are used. For me, it was not so much the sound quality that was critical as the sound lagging behind the picture when watching a video, and here it is not there, unlike the Sony WF-SP700N , the price of which is twice as high.

For lovers of telephone conversations, several microphones are installed in the headphones so that not only you can hear it, but the noise is also suppressed. Speech quality is really good, but worse than the AirPods.

During the use of problems with the quality of sound transmission occurred a couple of times – the music was intermittent. The problem was noticed only with the use of the MacBook and was solved by reconnecting.

Each earphone weighs 4.1 grams, is oval-shaped and sits in the ear not as elegant as AirPods, but they do not cause discomfort. Fly out of the ear when removing the jacket or strong shaking can easily.

In one earpiece 25 mAh, in a case 420 mAh. Work from one charge is declared about three hours, with a case – 20 hours. Smaller AirPods, but not critical. In addition, the case supports wireless charging, which can also be included in the advantage. For several months, Type-C used it once and then to check if it works. For three-day trips, one charge was enough without problems.

There is no quick charge, but with such a volume it is not needed. About 20 minutes will need to recharge 50 percent of the charge, completely less than an hour. This is with the wire, without it for 15 minutes longer.

The size of the FlyPods case is slightly larger than the AirPods, but it has wireless charging and can be placed vertically, which the competitor lacks because of the rounded shape.

The Apple headset has only one diode inside, which notifies you that the headphones are charging. There are no additional diodes to check the charging of the case. It is problematic to find out the level if you have a smartphone on Android.

Because of the round legs, AirPods look neater and more aesthetic. They work without recharging for up to 25 hours, and Apple can be configured touch faces, unlike FlyPods. 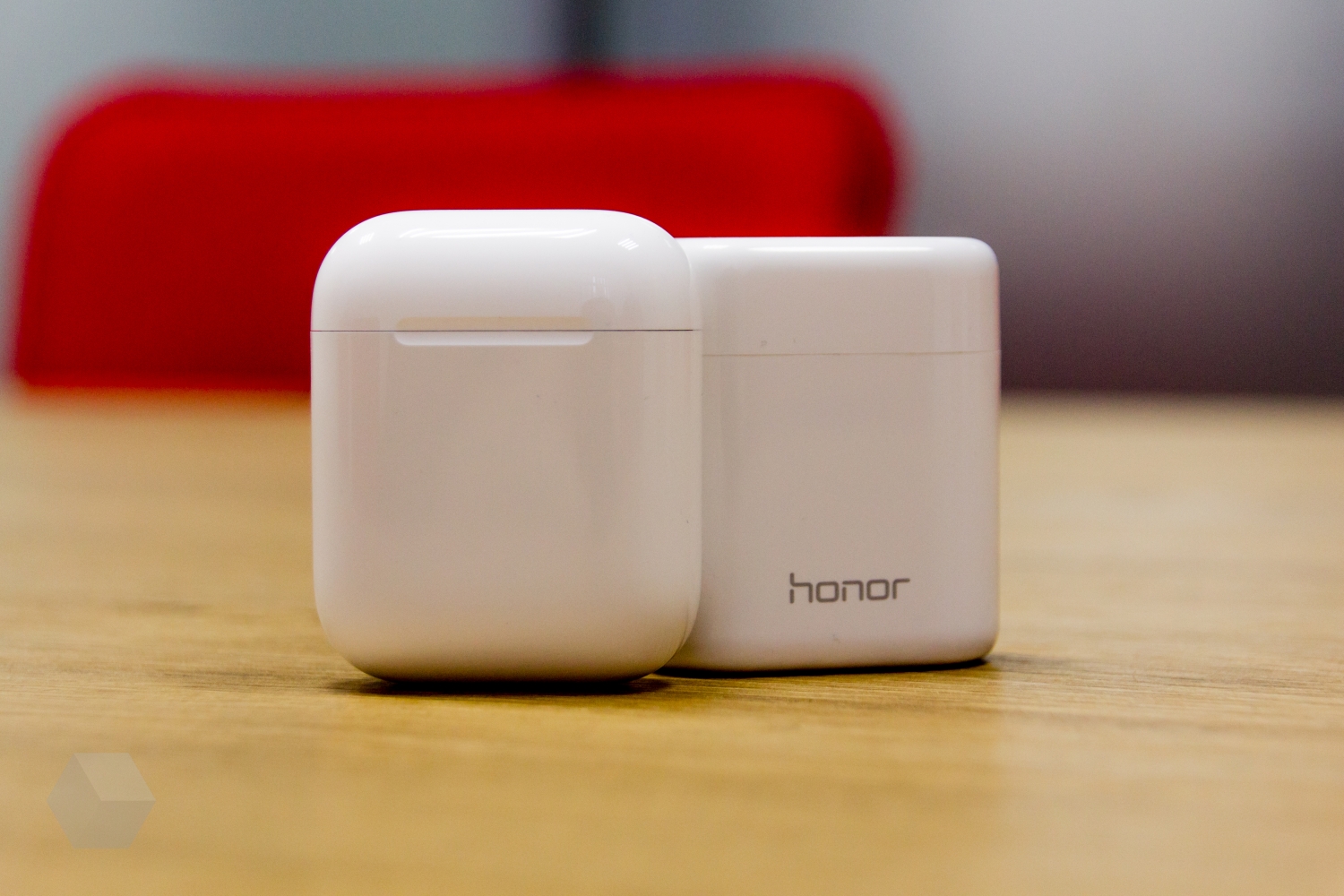 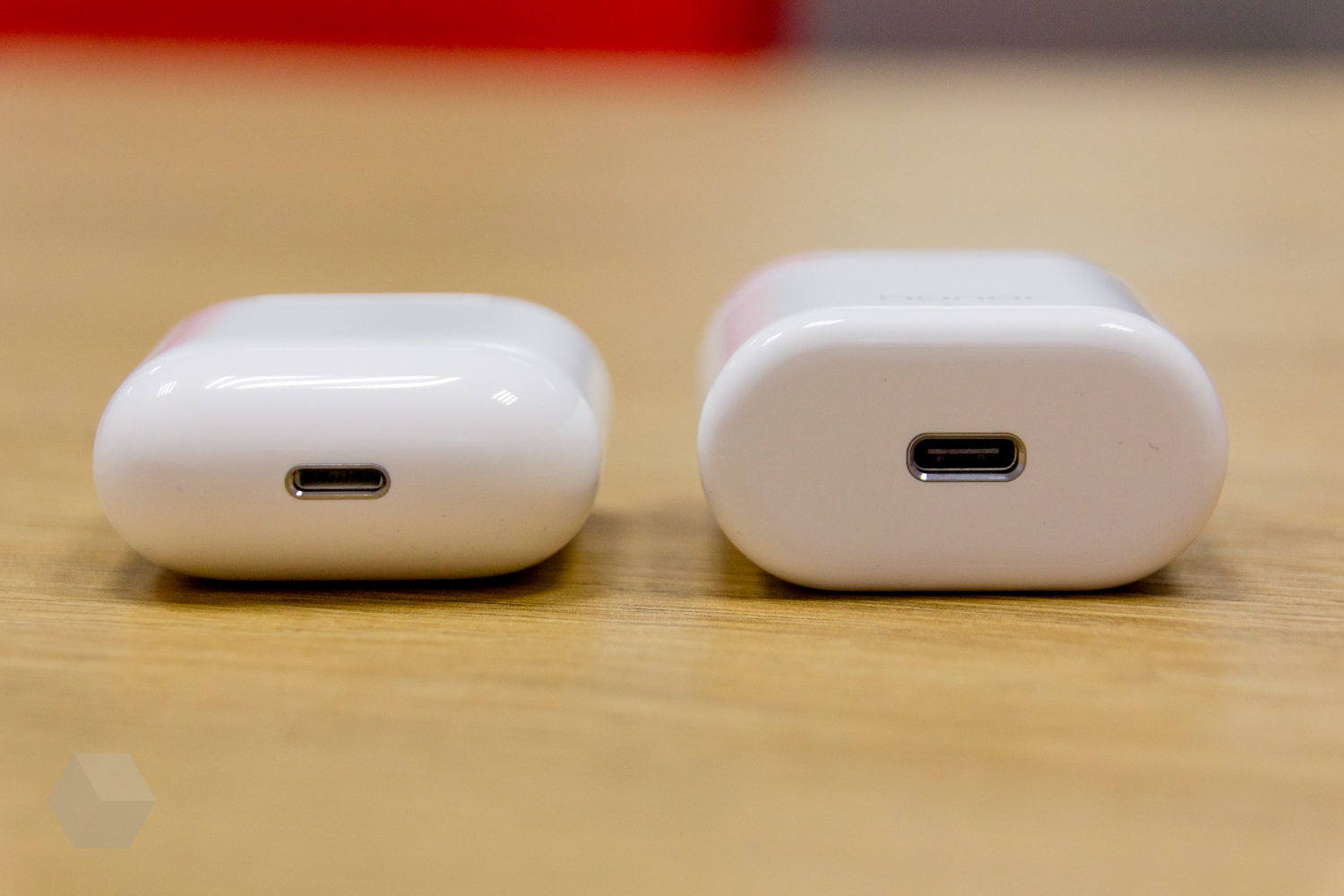 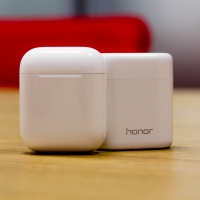 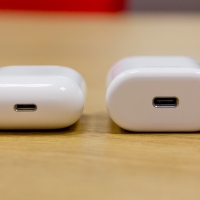 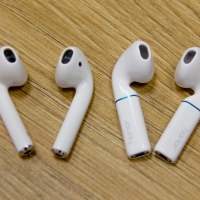 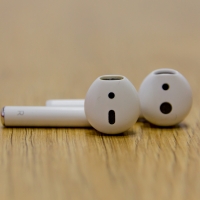 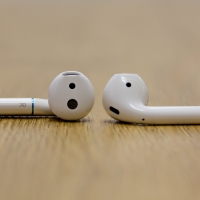 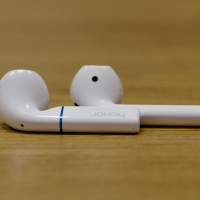 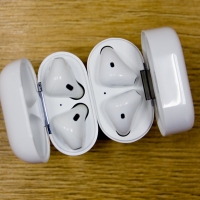 Both the first and the second because of the glossy plastic perfectly collect dust and small holes and the faces get clogged with time and become unpresentable.

In terms of sound quality, the AirPods are ahead, but here comes the issue of price.

Honor FlyPods are available in several versions of the assembly. We have the usual test, but there is also Pro and the second generation of Huawei FreeBuds headphones , which look the same, but have white and black colors.

Model Pro is focused on the Chinese market, has bone conduction and there, each earphone works autonomously. But the price in China is 999 yuan (~ 9,400 rubles). The same cost FreeBuds 2.

The usual model Honor FlyPods will cost 799 yuan (~ 7,500 rubles). Personally, I bought for 6,500 rubles, on Pandao (not advertising) and kept my fists until the last, I was afraid that the cat would come in a bag, but no.

I was not too lazy to analyze the Chinese sites, and this is what I found (from expensive to cheap):

The price varies with a difference of up to four thousand, that’s decent. Officially in Russia they will not be sold. Freebuds 2 may appear.

And do not forget about cashback, this is also a small, but an additional discount. For example, LetyShops .

Despite some shortcomings, I consider Honor FlyPods to be the best wireless in-ear headphones for Android smartphones. They say in their favor: low price, high-quality assembly, wireless charging, convenient universal form factor.

FlyPods will be appreciated by the owners of Huawei Mate 20 Pro and Samsung Galaxy S10 with reverse wireless charging technology. Put on the phone for 20 minutes and you can listen further.

Among the minuses: the inability to adjust the sensory edges and the average sound quality. Remembering Meizu Pop , which not only didn’t hold out badly in their ears, they also constantly lost contact, FlyPods would like to put a solid number five (in price / quality ratio). But not everything is perfect, there is work to be done in the next generation and do not forget to finalize it.

0
At its event today Apple announced that the next generation of its desktop operating system — macOS Big Sur — will be available this...
Read more
Gadgets

0
Samsung has begun pushing an update to the Galaxy Watch Active2 smartwatch, bringing security updates and one feature that was exclusive to the Galaxy...
Read more
Gadgets

0
Samsung is teasing new module that will allow users to customise Samsung keyboard... If you’re using a Samsung phone, or have used one in the...
Read more

0
An education technology startup, Mrs Deola Eka, on Tuesday in Lagos said that indiscriminate usage of Internet connectivity through phones and other gadgets was...
Read more
Video