Apple is planning to offer some kind of holiday App Store promotion that may see the company giving away free apps and games.

In Australia, where it is December 24, ‌App Store‌ users are waking up to an App Store story that mentions a “surprise” for Tuesday and explains that users can expect a treat every day from December 24 to December 29. 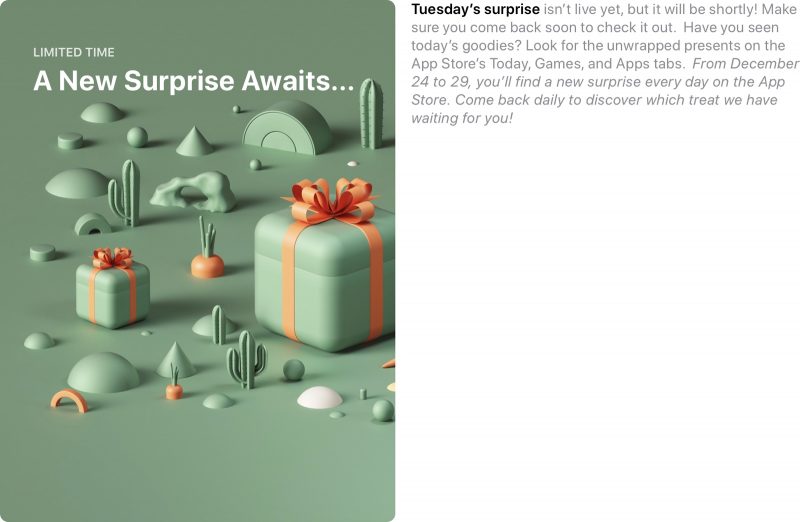 Tuesday’s surprise isn’t live yet, but it will be shortly! Make sure you come back soon to check it out.

Have you seen today’s goodies? Look for the unwrapped presents on the ‌App Store‌’s Today, Games, and Apps tabs.

From December 24 to 29, you’ll find a new surprise every day on the ‌App Store‌. Come back daily to discover which treat we have waiting for you!

The wording of the story suggests that Apple is planning to give away free apps and games in a promotion similar to the 12 Days of Christmas promotion that the company used to run several years back.

We don’t know yet what app or game Apple plans to give away on December 24, but we should find out soon from Australian users. ‌App Store‌ users in other countries like the United States can expect to see the same promotions when December 24 rolls around.

Update 10:39 a.m.: The surprises have gone live in New Zealand, readers tonyduffe and @Ldeverell report that the deals include a special in-app purchase bundle Looney Tunes World of Mayhem and a three-month subscription for the price of one month in Canva. We’ll have to see if offers are the same around the world. 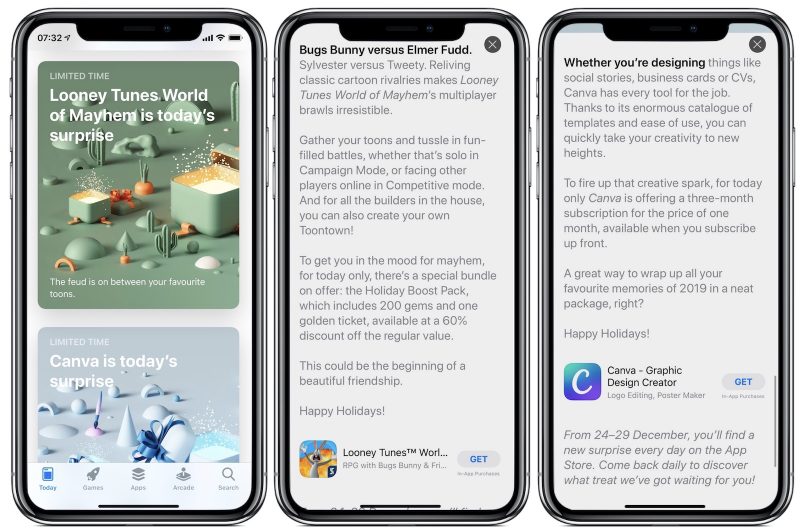 0
When OnePlus released the third developer preview of OxygenOS 11 for OnePlus 8 series, the company bundled the redesigned versions of stock OxygenOS apps such as the Gallery, Notes,...
Read more
Apps

0
PC, PS4, Xbox One, Switch, Stadia... As the ongoing Coronavirus pandemic has locked down most of the global population, there has been a massive boost...
Read more
Apps

Marvel has been cooking the Avengers game

0
Marvel has been cooking the Avengers game for quite a long time now. We have seen the production house release the trailer and the gameplay footage back in 2019. In...
Read more

0
vivo announced the V20, V20 SE, and V20 Pro 5G in September. The vanilla V20 and SE models already made their way to India since and today the Pro variant joins them. The...
Read more

I SHOULD NOT HAVE bought the iPhone 12 Pro Max!

iPhone 11 Pro vs iPhone 12 Pro – Which Should You Choose?