As of iOS 13, apps are no longer able to present an “always allow” option when requesting access to a user’s location. The only way to immediately grant an app continuous access to location is to navigate to Settings > Privacy > Location Services, tap on an app, and select the “always” option if available.

iOS 13 also periodically reminds users about apps that are continuously tracking their location, complete with a map of those locations. An on-screen alert provides users with options to continue to “always allow” ongoing access to their location or to limit access to while the app is being used. 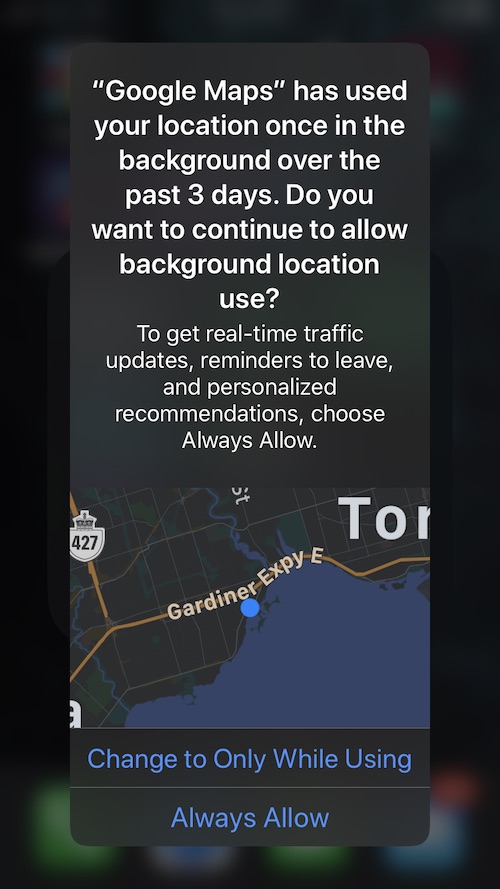 In light of those changes, The Wall Street Journal today reported that some developers are concerned that the location tracking reminders will hurt adoption of their apps, while some iPhone users are said to have expressed frustration that the reminders appear every few days despite repeatedly selecting “always allow.”

Apple responded to the report with a statement insisting that the changes were made to further safeguard user privacy.

“Apple has not built a business model around knowing a customer’s location or the location of their device,” an Apple spokesperson told The Wall Street Journal, adding that Apple builds its hardware and software with privacy in mind.

The amount of location data collected by apps while in the background has dropped by 70 percent since iOS 13 was released, according to Jason Smith, chief business officer of data intelligence company Location Sciences. Given how easily the data can be used to identify and track individuals, that is a promising sign.

You Can’t Buy This CPU… Yet