Application updates of the week. December 16-22

Almost the past week is not distinguished by super important updates of mobile applications. But there’s something to tell: the user-friendly Twitter interface on the iPad, the dark theme in Google Podcasts, personalized playlists in YouTube Music, and something else.

Twitter is testing a new application layout for iPadOS 13. Now it will be more convenient to use a social network on a large screen.

The new design resembles the modern web version of Twitter. The main menu with sections moves from the bottom of the screen to the left side, and on the right is a ribbon with trends and a search bar. In the center is the main feed with tweets and profile information. 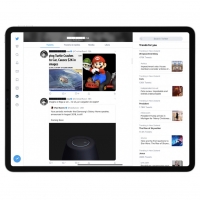 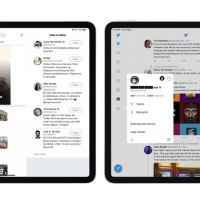 Twitter update for iPadOS 13 is being distributed gradually and now only part of the users are available.

Google continues to spread the dark theme among its apps. Now he has reached Google Podcasts, a service for listening to podcasts.

As in other Google applications, the background has changed to graphite color, and the control icons have become slightly less bright – all in order to make it convenient to use Podcasts in the dark. The design setting depends on the state set in the system.

Google Podcasts is tied to the main Google Search application, so installing the latest version of Podcasts will not allow the latest features to appear. The update is distributed on the server side.

The music streaming service has new playlists based on user preferences.

Here Google did not come up with anything new: exactly the same playlists have long existed, for example, in Spotify. Innovations are already appearing on all YouTube Music presence platforms.

Microsoft To Do 2.7 for iOS

Microsoft recently added new useful features to the To Do task list app for iOS, as it updates it again.

Version To Do 2.7 supports Siri Shortcuts (“Siri Shortcuts”). You can train Apple Voice Assistant to add notes to a task list in one command. Now you can directly share the link to the web page in To Do directly from the browser, and it will appear as a comment in the task.

An advanced notification setting has also appeared. The user can disable notifications from the general lists operated by several people.

Pauline A . E
Be the change you want to see in the world...
Previous articleHow to Connect Phone to TV (Works with any Device)
Next articleApple has disabled the U1 chips built into the iPhone 11

0
Romelu Lukaku incurred the wrath of Manchester United manager Ole Gunnar Solskjaer with a controversial tweet on Friday. Lukaku is being heavily linked with a...
Read more
Video

12 BRUTAL Smartphone Fails they want you to forget

0
12 BRUTAL Smartphone Fails they want you to forget... My Top 12 Smartphone fails of all time (Episode 3), featuring fails from Sony, to Nokia,...
Read more