best tripod for iPhones and other smartphones

If you’ve ever compared who has the longest arms to take a group selfie or struggled to keep your smartphone stable while shooting video, a tripod and mount made specifically for phones might make your life easier. We recommend using the Joby GorillaPod 1K Kit and the Square Jellyfish Metal Spring Tripod Mount together as the best smartphone tripod and mount, after testing dozens of options along the trails of the Pacific Northwest, in the urban forests of Minnesota, and on the streets of Seattle.

If you use your smartphone for low-light photography, time-lapses, selfies, or slow-motion video—or if you just like putting your phone in places that you can’t easily reach by hand—this pair holds any smartphone steady at any angle, yet the GorillaPod and Square Jellyfish combo is still small enough to toss into your shoulder bag.

Joby’s GorillaPod 1K Kit is stronger and more flexible than anything else out there for the price. The ball-head mount moves smoothly and the long, articulated legs wrap around most anything, such as a tree branch or street signpost. At 10.24 inches from mount to foot, it’s about 4 inches longer than most of the no-name, cheaper options; this gives it more reach for selfies and can help it wrap around thicker branches and posts. Additionally, its 2.2-pound weight limit is enough to support most compact cameras and even some mirrorless setups.

Unlike other models we looked at, the Square Jellyfish mount can hold a large smartphone stable in portrait or landscape orientation even without a stand. As small as a set of keys, the Square Jellyfish mount easily holds an iPhone 11 Pro Max and is stable enough to stand on its own in both vertical and horizontal orientations even without a tripod. Just make sure you get the metal mount version because there are user reports of the threads, which let you attach the mount to any standard tripod screw, wearing out over time on the cheaper plastic one. We chose to pair the Square Jellyfish with the GorillaPod 1K Kit because it is a more secure mount than the one that Joby pairs with its other kits.

If you need both a selfie stick and a tripod, the Yoozon Selfie Stick is an affordable two-in-one that quickly transforms from a telescoping arm extender to a tabletop tripod. It can’t grip a tree branch or street sign like the GorillaPod 1K, but it does come with a stick-of-gum-sized Bluetooth trigger—pair it with your phone and press its button to grab shots from afar.

Why you should trust us

Erin Lodi is a photojournalist, writer, and professional photographer with a wide range of experience researching, testing, and writing about photography trends, techniques, and tools, including her role as mobile-imaging editor at DPReview, the most popular camera site on the Web.

Signe Brewster is a photography enthusiast who writes Wirecutter’s guides to photography drones and gimbals. When she isn’t capturing videos from the sky, she likes to photograph Minnesota’s Victorian architecture with an iPhone 6S.

Who should use a smartphone mount and tripod

Anyone who likes to use the timer function in their phone’s camera app, stabilize their video, or shoot videos hands-free can benefit from a smartphone mount.

Most tripods are made for cameras, with no way to securely attach a smartphone. A smartphone mount, which usually takes the form of a clamp that grabs onto the sides of a phone, is an adapter that changes that.

The pool of people who will benefit from a smartphone-specific tripod is smaller. A regular tripod, which we cover in our guides to tripods and travel tripods, will work for a phone in most situations. However, the tripods we cover in this guide are uniquely built to function as selfie sticks or grab onto structures like signposts or trees. They’re also smaller than traditional tripods, which means you can casually throw one into a backpack instead of lugging around a gadget the size of a baseball bat. But they aren’t nearly as long as traditional tripods, which means you must attach them to another tall object to grab an eye-height shot; you’re out of luck in an open field. As a result, you should treat a smartphone tripod as a portable alternative, but understand that a traditional tripod is useful in more scenarios.

How we picked and tested 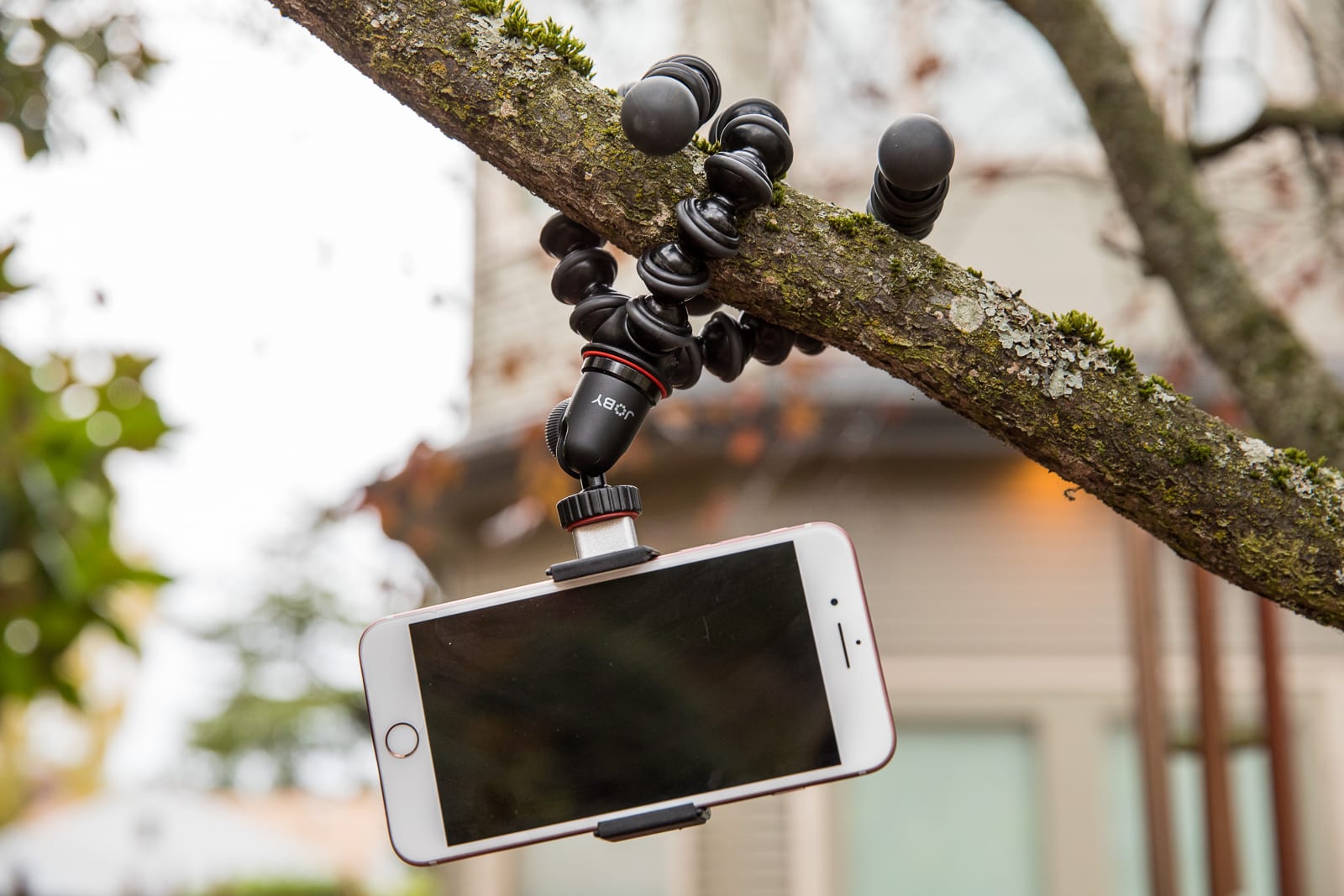 Photo: Erin Lodi
We spent 20 hours researching more than 70 smartphone-stabilization systems before testing 21 sets of legs and 15 tripod mounts to determine what you really need to keep your smartphone snaps and videos steady. We filmed waterfalls while hiking in the Pacific Northwest and snapped images of the Space Needle in Seattle in an initial round of testing. In a second round of testing in 2019, we went on a photo walk in the woods of St. Paul and filmed hands-free videos indoors.

As with standard-size tripods and travel tripods, we considered legs and mounts separately (in this case, looking at phone mounts rather than the ball heads intended for full-size cameras). We tested legs to confirm that they were sturdy enough to support the weight of the smartphone and mount, and we tested the grippiness of their feet on a variety of surfaces.

We examined mounts to make sure they could securely hold smartphones as large as a cased iPhone XS Max, and as small as a Samsung Galaxy S7 without a case. We tested how easily we could make positional adjustments, giving extra credit to smartphone mounts that were able to serve on their own as makeshift stands. We also considered several all-in-one units, those with legs and an integrated mount. Ultimately, we realized we wanted a mount that could slip into a pocket easily, securely mount a smartphone to most tripod legs, and work alone to keep the phone upright in landscape or portrait position.

Portability was a primary consideration for both, because the best accessories for your most portable camera should also slip into a pocket or small bag.

0
https://youtu.be/ph1Ax2gdJs4 Crystal Pyramids Were Discovered Under the Bermuda Triangle There are few better ways to make someone nervous than telling them they’re about to move through...
Read more
Trending Videos

0
https://youtu.be/ph1Ax2gdJs4 20 Mythical Creatures That Were Only Seen Once Humans have an amazing imagination ability, and sometimes that has been used to dream up some really...
Read more
Tech News

0
Bitcoin long-term holders may have started to lose their conviction for the cryptocurrency owing to the constant price decline. Additionally, these holders may...
Read more
Business

0
https://youtu.be/ph1Ax2gdJs4 Crystal Pyramids Were Discovered Under the Bermuda Triangle There are few better ways to make someone nervous than telling them they’re about to move through...
Read more

1 In A Million Moments In Mother Nature

0
https://youtu.be/ph1Ax2gdJs4 1 In A Million Moments In Mother Nature Nature is pretty weird. When you think about it - how did all this stuff just start...
Read more

0
https://youtu.be/ph1Ax2gdJs4 20 Mythical Creatures That Were Only Seen Once Humans have an amazing imagination ability, and sometimes that has been used to dream up some really...
Read more

Phone Captures What No One Was Supposed to See

0
Phone Captures What No One Was Supposed to See Whether you are reaching for your device to read the latest tweet-storm, text a friend or...
Read more

15 Angel Sightings That Will Convince You They Are Real!

0
15 Angel Sightings That Will Convince You They Are Real! It’s often claimed that we all have a guardian angel, we just don’t see them....
Read more

0
Alongside the Oppo’s Find X2 series, tomorrow will see the debut of Oppo’s first smartwatch - the Oppo Watch. We’ve been seeing plenty of...
Read more
Video

How to Get US Playstore On Any Android (Android Tips)