Phone accessory store Mobile Fun is getting into the leak business – it posted a video showing off replicas of the upcoming Samsung Galaxy S20 trio. Previously, we’ve seen 3D printed dummies, which are based on 3D CAD models, but these replicas are used by factories in China to test cases and other accessories for the real phones. 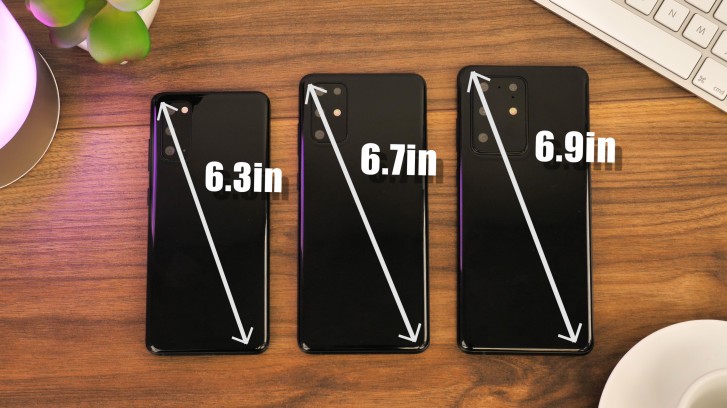 The Samsung Galaxy S20 Ultra dwarfs previous members of the S-series, it’s about the same size as the Galaxy Note10+, a bit taller, actually.

The Galaxy S20 and Galaxy S20+ are more conservative, their height and width are only slightly larger than those of the S10 and S10+, respectively. This means that the whole family has shifted up in size – since there’s no “e” model this year, the S20 will be the smallest S-phone on offer.

The camera bump is noticeably thicker and wider on the Galaxy S20 Ultra. The replicas lack the “100x” decal and the dummy telephoto camera is round, but otherwise the camera layout matches the leaked renders. Here are the bump dimensions, measured by Mobile Fun.

Here’s some good news and some bad news. We’ll start with the bad, the 3.5mm headphone jack is gone. We expected as much, since Samsung dropped it from the Note10 phones. If it’s any consolation, the Bixby button on the left is gone too.

There’s a second video, focusing on the cases for the Galaxy S20 trio, you can watch it here.

Opuru Joy
Your challenges either make you a BETTER person or a BITTER one, but they can never leave you as the same person. Challenges are 5% of life. Your reaction or response to challenges are the other 95%. Dont let 5% ruin 95%. Stay BLESSED, not STRESSED, Tech report thrills me, Tech report makes me feel better in this world of technology... All Tech News is the best tech zone.
Previous articleiPhone 9 (2020) – But Why?
Next articleSamsung Galaxy S20 Plus vs Samsung Galaxy Note 10 Plus

What is a Chromebook?

0
What is a Chromebook? Chromebooks aren’t like other laptops. They run Chrome OS, an operating system made by Google. They are powerful, so they can...
Read more

Galaxy S21 Ultra – THIS IS WEIRD