Here is Smart Tech Band Prevent You from Touching Your Face

One thing that we know about the Novel Coronavirus is that it spreads by contact. As per the CDC, a person can infect himself/herself by touching a surface consisting of the Coronavirus and then touching his/her face with the virus-containing hands. So, to prevent us from touching our face, a young creator has made a smart wrist band that will alert us every time we try to touch our face.

The Immutouch band is a smart wrist band that sits on your wrist like a watch and vibrates every time you take your hands near your face. It is created a Seattle-based young mind, Justin Ith and his team of talented individuals.

Now, the way the Immutouch band works is that whenever your hand comes around the vicinity of your face, especially near your eyes, nose or mouth, the band will buzz to alert you that you are touching you are about to touch your face. It uses a gravimeter to create a personalisable algorithm that is made just for you. The band is also water-resistant and can last up to 24 hours on a single charge.

The band is paired with the Immutouch app, which is available on the Play Store and App Store, for the calibration process. So, what this means is that you need to tell the band where your eyes, nose and mouth are by taking your hand near them one by one. This process will enable the band to recognise the restricted position. Hence, after the completion, the next time you take your hands near that calibrated area, the band will know and buzz you accordingly. 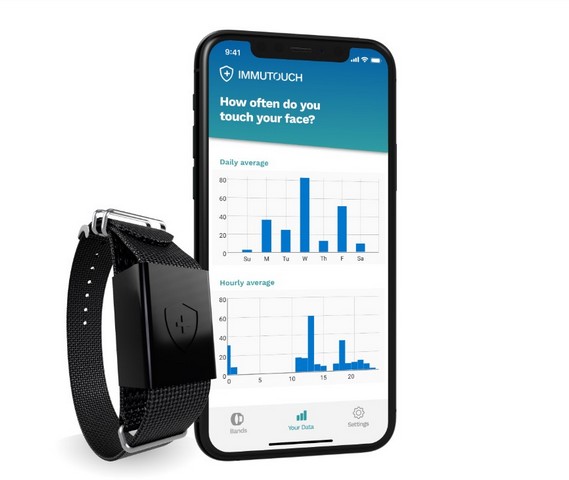 The app will also keep track of how many times you tried to touch your face on a weekly basis. As you can see in the image above, it will record the data in a graphical manner to provide more information at a glance.

Justin and his team launched the band on March 9, after Washington reported it first COVID-19 deaths. After the launch, the Immutouch has received a very good response as many health care workers are using the band to avoid touching faces, according to Justin.

In an interview with Reuters, Justin said, “We have been most excited to see frontline heroes in healthcare use these devices to protect themselves, as well as companies who have been reaching out and want to protect their employees and bring their safety to the next level.”

The creator went on to point out that according to a study by the National Institutes for Health (NIH), an average human being touches his/her face at least 23 times per day. So, the band couldn’t have come out at a better time than this as it drastically reduces the chance of contracting the deadly COVID-19.

alltechng
Technology is making life more meaningful, improves productivity... We are tech lovers...
Previous articleiPhone SE (2020) vs iPhone XR After 1 Week – NOT what I expected
Next articleOverview of Google Pixel 4a photo capabilities before smartphone announcement

0
Fitbit has released a new software update for the Charge 4 fitness band which brings along a couple of useful features. The first one's Dynamic...
Read more
Gadgets

0
Apart from manufacturing high-end mobile devices and flagship smartphones, Samsung is also a big name in the home electronics market. The company has its own range of TVs,...
Read more

0
28 AMAZING DIY IDEAS FOR EASTER Preparing all the Easter treats for this holiday isn’t very easy. And with the holiday just around the corner, we...
Read more
Video