Windows 10 has been one of the most popular OSes in recent times. Recently we saw that Microsoft’s latest OS is powering more than 1 billion devices in the world. However, out of those 1 billion devices, no device had the OS running on just 192MB of RAM. Except this Twitter user’s machine. 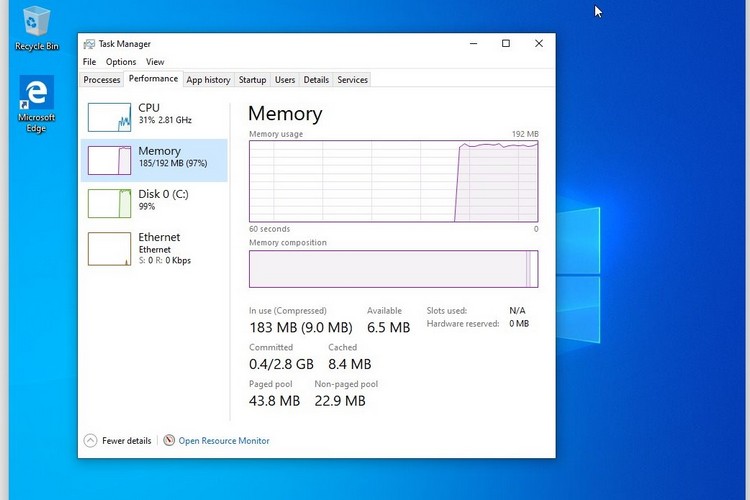 A 16-year-old Twitter user going by the name Sakura Nori (@0xN0ri) tweeted a thread recently where the user ran the 32-bit version of the Windows 10 on a machine with only 192MB of RAM. This is a great achievement as the user ran the OS in less than a quarter of the recommended 1 GB RAM by Microsoft.

Nori used a good ol’ Dell Inspiron 3670 running Arch Linux. The user was able to accomplish the task by running the OS on Oracle VM VirtualBox. The CPU that was used for running this experiment was an Intel Core i5-8400.

According to tom’s Hardware, the user started to run Windows 10 on a low-RAM machine as a part of a “fun experiment”. Nori started off with 512MB of RAM and subsequently went down to 256MB and then to 192MB. Upon request from other users, Nori also tried to run the OS on 128MB of RAM. But unfortunately, it was too low for Windows 10 and the user got a “blue screen of death“.

Decided to go even lower pic.twitter.com/vORqmpqXzZ

Now, using 192MB of RAM, Nori was able to boot up the machine in around three minutes. According to Nori, no services were disabled and no changes were made to the OS for running this test.

The user told tom’s Hardware, “I was only able to get task manager, cmd, and file explorer open on 192MB RAM and the performance was very bad with 15MB free.”

Now before running Windows 10 on a mere 128MB of RAM, Nori also tried to run it on 140MB. The machine actually booted up using only 140MB of RAM, however, the user could not log in to the machine as it crashed. Nonetheless, the fact that Windows 10 was able to boot up using just 140MB of RAM is just straight-up insane.

Is the Samsung Galaxy S20 Ultra WORTH IT? – Review

0
Is the Samsung Galaxy S20 Ultra WORTH IT? - Review
Read more