Leakster Ice Universe has posted a breakdown of the image sensor models that will be used by the Samsung Galaxy S20 family. It shows that the company will use a mix of Samsung and Sony sensors.

Let’s start from the top. The main camera on the Samsung Galaxy S20 Ultra will use S5KHM1, a 108MP sensor. A custom version, it seems, Samsung’s other 108MP sensor (i.e. the one used in the Xiaomi Mi Note 10) is the S5KHMX.

The Samsung Galaxy S20+ camera modules were detailed a few days ago as part of the copious leaks supplied by Max Winebach. They are identical to the Galaxy S20 setup, save for the addition of a 3D ToF sensor – an IMX516 (the Ultra model will use a new IMX518 ToF sensor).

The main camera is a Sony IMX555, a 12MP shooter, which is said to have large 1.8µm pixels (no pixel binning here). Then there’s the S5KGW2 sensor for the telephoto camera. There are no official details about this one, but it’s related to the 64MP ISOCELL GW1 sensor.

Finally, the ultrawide camera uses an S5K2LA sensor with 12MP resolution. Again, there are no official details about this one, but the S5K2L family of sensors ranges from 1.25µm to 1.4µm pixels, depending on the exact model.

All three Samsung Galaxy S20 models use a Sony IMX374 sensor for the selfie camera – that’s a 10MP sensor with 1.22µm pixels and Dual Pixel AF. If that sounds familiar, it’s the exact same module that the S10 and Note10 phones used. 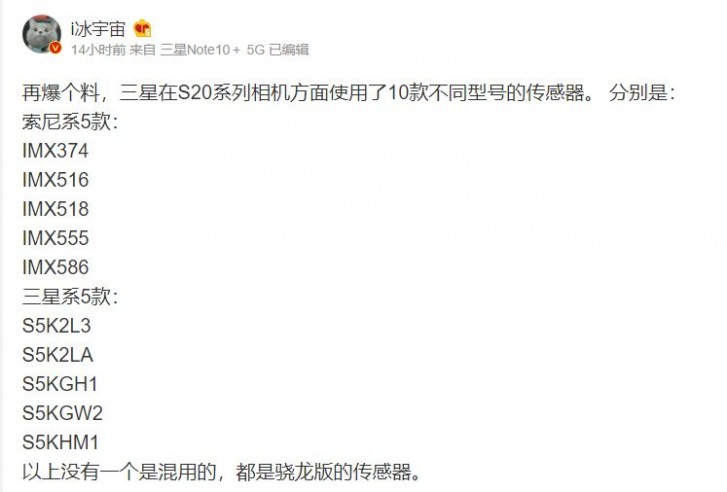 Pauline A . E
Be the change you want to see in the world...
Previous articleGoogle Fi user would soon have two separate voicemail inboxes – This is why
Next article2020 A-series – Samsung introduced Galaxy A51 and Galaxy A71

How to prevent peeking messages on Messenger

0
How to prevent peeking messages on Messenger
Read more
Video

Infinix Zero 8 Unboxing & Impressions – They FINALLY did IT!

Here is 6 Cars Banned In America!!