The Joint Admissions and Matriculation Board – JAMB has disclosed that some of the candidates on the malpractice list in the 2020 UTME had already been arraigned for offenses like examination by proxy, double registration, attempt to cheat, connivance to cheat, unruly behavior, and smuggling of electronic device into the examination hall.  He, however, noted that the COVID-19 pandemic interrupted the process. 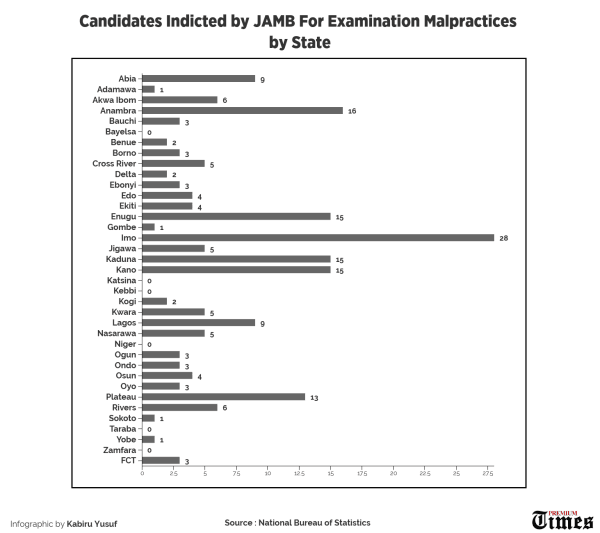 A review of the named candidates on the malpractice list shows that Imo State has the largest share with 25 candidates sitting for the exam in the state. Anambra had the second-highest number of candidates on the list (16), while Enugu, Kaduna, and Kano had 15 perpetrators each.

At the bottom of the list are Adamawa, Sokoto, Gombe and Yobe which had only one each. The FCT recorded three offenders while Lagos had nine. The five states not on the list were: Kebbi, Niger, Taraba, Bayelsa and Zamfara.

According to the information provided by JAMB, the most common form of malpractice by candidates in the 2020 UTME is examination by proxy with 89 candidates being caught in the act.

Other misconducts, according to JAMB, include unruly behaviour which was levelled against nine candidates; double registration by seven candidates; four candidates tampered with exam documents; while three were accused of forceful entrance and a candidate was accused of faking vital documents.

Samsung Galaxy M51 vs Realme 7 Pro || Full Comparison – Which one is Best?