$200 is usually the budget to target if you are looking for a smartphone that will offer you a decent performance. At this price range you will get cheap Android phones that look good and at the same time has a decent amount of quality features. 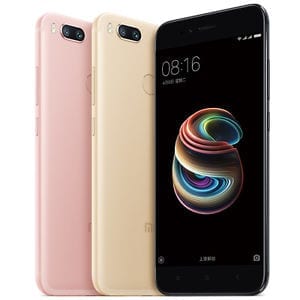 The 5.5-inch display on the Xiaomi Mi 5X was made even more desirable with its resolutions that are set at 1080 x 1920 pixels. The device then goes on to offer such amazing specs as the pairing of a massive 4GB RAM to an even more impressive storage space of 64GB.

That is already asking too much of a budget smartphone, yet we get Android 7 Nougat, a 13MP sensor on the back and 5M snapper on the front to boot. Of course, the rear camera sensor has a LED flash to better capturing of images in low light situations.

Going under the hood for a little bit of adventure, we find out that the Mi 5X makes use of an octa-core Qualcomm Snapdragon 625 chipset, which makes it worthy of being listed as one of the best Android phones under $200. If that will mean anything, it is that we get great power savings on the fairly impressive battery.

Coming in three colour options of Rose Gold, Gold and Black, we don’t like the fact that there is no fingerprint sensor anywhere on this device. It is available for $180.

Pauline A . E
Be the change you want to see in the world...
Previous articleNo One Should Ever Sleep with a Ponytail, Here’s Why
Next articleXiaomi Mi 5X Price ($179.99)

Why iOS Is Better Than Android

0
Why iOS Is Better Than Android... The iOS vs Android debate has been ongoing ever since the platforms were created over a decade ago. And...
Read more
Video

Why The MacBook’s Glowing Apple Logo Was Removed

0
Why The MacBook's Glowing Apple Logo Was Removed... Back in 2015, Apple introduced the 12-inch MacBook. The first model ever to feature an Apple logo that...
Read more
Video

0
Why iPhones Are Getting Bigger... We all know Apple is an American company and enjoys making a large chunk of their revenue domestically. But Apple...
Read more

Why iOS Is Better Than Android

0
Why iOS Is Better Than Android... The iOS vs Android debate has been ongoing ever since the platforms were created over a decade ago. And...
Read more

0
Every Windows Startup & Shutdown Sound... iOS 14.5 Official Review! How to unlock your iPhone with your Apple Watch iPhone 12 in Purple – Unboxing and First...
Read more

Samsung Galaxy Note 20 – THIS is what you wanted

0
Samsung Galaxy Note 20 - THIS is what you wanted.
Read more