The second beta of macOS Catalina 10.15.4 was released today, and the new update introduces support for time-synced lyrics in the Apple Music app. 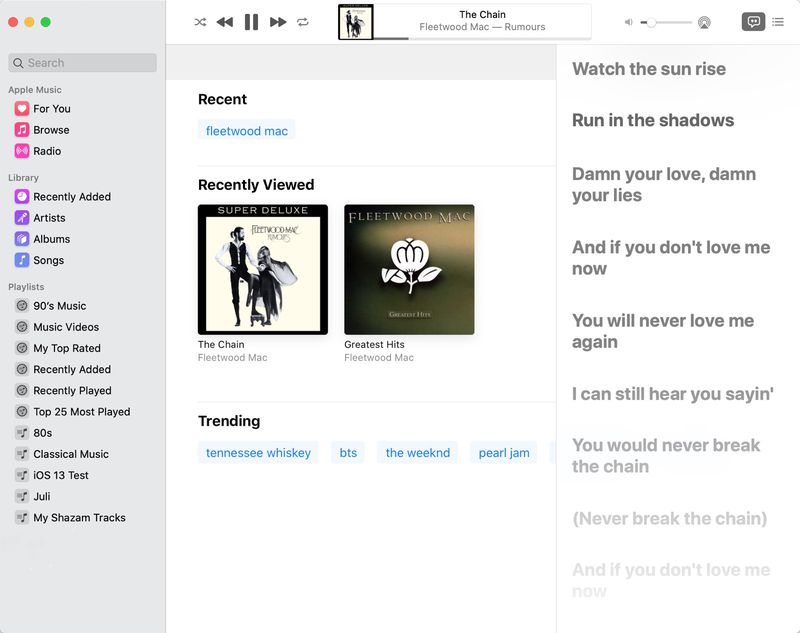 ‌Apple Music‌ for Mac previously provided access to lyrics, but they did not scroll in real-time to the music, which is a feature that’s been available on iOS since iOS 13 was released. As noted by 9to5Mac, the time-synced lyric feature addition is mentioned in the ‌macOS Catalina‌ 10.15.4 release notes.

Lyrics in ‌Apple Music‌ for Mac can be accessed by playing a song and then clicking on the little speech bubble that’s located at the top right of the app.

Not all songs have lyrics or time-synced lyrics, but lyric information is available for most popular titles. Songs with time-synced lyrics will feature an interface that scrolls through the lyrics as they’re sung.

When real-time lyrics were introduced for ‌iOS 13‌ in September 2019, ‌Apple Music‌ lead Oliver Schusser said in an interview that Apple has a team of employees that listen to songs and transcribe the lyrics to ensure their accuracy for use in the time-synced lyrics feature rather than sourcing lyrics from a third-party provider.

Pauline A . E
Be the change you want to see in the world...
Previous articleTwitter Adds ‘Continue Thread’ Option for Linking a New Tweet to an Existing Tweet
Next articleFree!! iCloud Unlock For Any iPhone✔Any iOS✔Lost/Stolen/Disabled✔All Success✔

0
HOW G.W.G WORKS? NO1. To get started you need to click on signup and register free account then make sure you input correctly all the...
Read more
Internet

0
To start earning heavily you must install Telegram on your smartphone: use the link below to start making money online. USE THIS LINK To Start...
Read more
Internet

0
AirPods are due for a Design Refresh...
Read more

This Takes Things to Another Level

0
This Takes Things to Another Level...
Read more

This is TWO SSDs

Huawei – The NEXT APPLE 🍎

0
Huawei - The NEXT APPLE 🍎 So yeah Huawei is Becoming Like Apple, And i believe that they will again lead the smartphone market!! Also...
Read more
Video