With the latest Windows Insider Preview Build 19603 that started rolling out to Windows 10 Insiders in Fast Ring on Wednesday, Microsoft appears to have added a ‘What’s New’ page in Settings that is hidden by default, as spotted by Albacore on Twitter.

According to the tweet, the feature is intended to help Windows 10 users discover new features the Redmond giant is baking into the operating system. When the user clicks on any of the new features listed on the What’s New page, a neat popup appears on the screen describing more about the feature.

Microsoft is also working on a place in Settings for people to discover new features. A nice touch after the variety of complaints about poor discoverability of various new small improvements. Currently found in the Update & Security category as What’s New. pic.twitter.com/XucystvXKC

It is worth noting that Windows 10 already has a similar feature to see new changes from Settings using the ‘Explore new features’ link present in the right pane of Settings app on the Windows Update page. Users are currently taken to Windows 10’s Tips app upon clicking it. 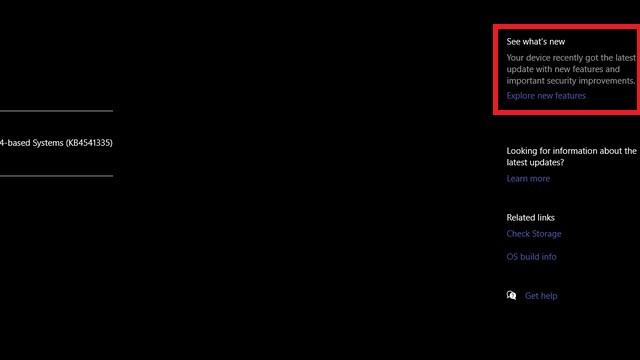 Apparently, Windows 10 users might not be noticing ‘Explore new features’ as much as Microsoft wants them to right now. This redesign paves way for a better visual experience from a user’s perspective and brings in better noticeability.

Microsoft’s Brandon LeBlanc says this new feature was intentionally skipped in the blog post as the feature is not ready to be used by Insiders just yet. “Sometimes the team working on the feature isn’t ready to take feedback on what they are working on which is one of the reasons its hidden in code. It can vary depending on the team and feature.”, he said.

We could expect Microsoft to make this What’s New page accessible to all Insiders on the next Windows 10 Insider build. Either way, it is a nice touch to help Windows 10 users stay in the loop with new Windows 10 features as they arrive.