By alltechng
March 9, 2019
0
35
Facebook
Twitter
Pinterest
WhatsApp
Linkedin
ReddIt
Email
Print
Tumblr
Telegram
StumbleUpon
VK
Digg
LINE
Viber
- Advertisement -
As it is now, the Internet has been abuzz with rumours about the upcoming OnePlus smartphone. Likely to be called OnePlus 7, the smartphone is expected to launch in April/May this year. An alleged OnePlus 7model recently got listed online on an UK-based e-commerce website called Giztop, revealing its specifications. The listing not only shows the smartphone’s image but also the expected specifications and the US price.
As seen in the listing, the handset will have a no-notch front with minimal bezels on all the four sides. There will be a speaker grille on top, volume buttons on the left side and the power button on the right side. Although this is likely a placeholder, it stays in line with the recent rumours and leaks that have made their way to the internet. 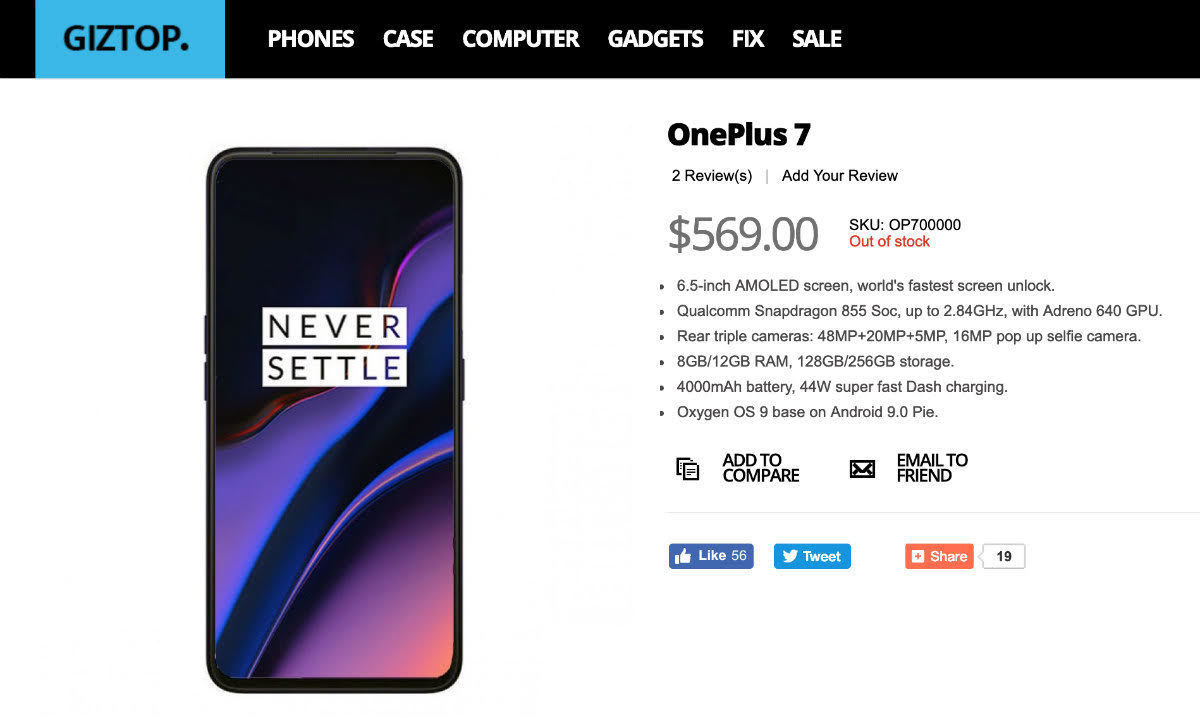 As for the price, the ‘OnePlus 7’ listing shows the handset priced at $569, which roughly translates to Rs 40,000. It is worth adding here that the price mentioned here could be for the base model. Currently, OnePlus 6T costs $549 for the 6GB RAM+128GB storage variant in the US. The most powerful model with 8GB RAM+256GB storage costs $629.

As for the speculations, OnePlus 7 is said to feature a 6.5-inch display with Corning Gorilla Glass 6 protection and might be powered by the Qualcomm Snapdragon 855 processor with 6GB/8GB RAM and 128GB/256GB inbuilt storage.

What cements previous rumours is that the handset will feature triple rear cameras, which will include a 48MP sensor with 20MP and 5MP sensor. At the front, there could be a 16MP sensor. Recent rumours indicated the inclusion of a pop-up camera, something we have seen in the Vivo V15 Pro. The listing shows the smartphone pack 4000mAh battery with ‘VOOC’ charging, which seems unlikely given that the particular charging tech is patented by Oppo.

OnePlus has not yet revealed any details about the ‘OnePlus 7’ but has confirmed that it will be introducing a 5G supporting smartphone this year.

0
iQOO Z3 India dispatch set for June 8... The iQOO Z3 declared in China in March should show up in India toward the beginning of...
Read more
Mobile Phones

0
Xiaomi prods Redmi Note 8 2021 as the first passes 25 million deals... Xiaomi's naming framework for its gadgets and the ones of sub-brand Redmi...
Read more
Mobile Phones

0
Best Apple Commercials. Enjoy, remember to sub and like. All of these commercials belong to apple i'm not trying to claim them i'm just making...
Read more
Tech News

0
A new Twitter client for iPhone and iPad launched today that aims to make it easier for users to manage their timeline and make...
Read more