Even though the whole world is currently battling the COVID-19 pandemic, OnePlus has startedgearing up to launch its upcoming OnePlus 8 flagship series on 14th April. The company has already shared with us some of the key hardware specs such as the new 120Hz AMOLED display, Snapdragon 865 chipset, and more. But, it’s thanks to noted tipster Roland Quandt over at WinFuture that we now know almost everything about both the OnePlus 8 and OnePlus 8 Pro.

So, if you’ve been wondering what the OnePlus 8 series will have in store for us, then here’s a quick rumor roundup of both the upcoming flagships:

Starting off with the design, OnePlus may be looking to refine its flagship lineup with the launch of the OnePlus 8 and 8 Pro. It will adopt a Samsung-like approach going forward. It will offer you the exact same design with its two flagship phones but with minor differences in the display, camera or battery department.

The design will now be the same as the OnePlus 7 Pro phones from last year, with a dual-curved display and vertical camera setup, minus the pop-up selfie camera. The pop-up mechanism will be swapped out for a punch-hole-style selfie snapper, as per the reports. It’s expected to a 16MP sensor, which is okay.

Moving to the front, OnePlus 8 is expected to sport a 6.55-inch Full-HD+ Fluid AMOLED display with a 90Hz refresh rate. It’s the same as the previous-gen 7T phone, no upgrades for the non-Pro variant here. The panel will support HDR10+, have better color accuracy, a faster in-display fingerprint sensor, and more. That’s pretty much everything we know about the OnePlus 8’s display for now.

The latest Snapdragon 865 chipset from Qualcomm will power this smartphone. You will also find the Snapdragon X55 modem onboard for 5G support (dual-mode 5G, SA and NSA support). The rumors suggest there will be two OnePlus 8 configurations – 8GB+128GB and 12GB+256GB. The company will use the faster LPDDR5 RAM and UFS 3.0 storage, along with Turbo Write, as revealed officially.

In the camera department, OnePlus 8 will stray away from the circular bump seen on its predecessor and include a vertical setup that we’ve already seen on the Pro models. It’s rumored to be a triple camera array with a primary 48MP (f/1.8) sensor, a 16MP ultra-wide lens, and a 2MP depth sensor. Yes, it looks like the company will ditch the telephoto lens (present aboard the OnePlus 7T) in favor of a depth sensor for, maybe, better portrait photography.

OnePlus 8 will most likely come equipped with a 4,300mAh batterybut weigh just around 178 grams – less than OnePlus 7T at 198 grams. The company won’t upgrade the charging speeds on the non-Pro, so expect to see the existing 30W Warp Charge 30T adapter in the box. The standard variant won’t support wireless charging, as per the leaks. You can check out the wireless charging details for the Pro variant down below.

The overall design and construction of the OnePlus 8 Pro will be exactly the same as the non-Pro variant. The key areas of differentiation will be the display and cameras.

On the front, OnePlus 8 Pro will feature a larger 6.78-inch 2K+ Fluid AMOLED display with a 120Hz refresh rate and a 240Hz touch sampling rate. This is a notch above the OnePlus 7T Pro. The panel is also expected to have permanently-activated 10-bit HDR support and 1300 nits of peak brightness, as per the leaks.

All of this has officially been confirmed, along with the presence of a dedicated MEMC chip onboard. It will enable the device to upscale 24fps content to 120fps to offer you a far more immersive experience. 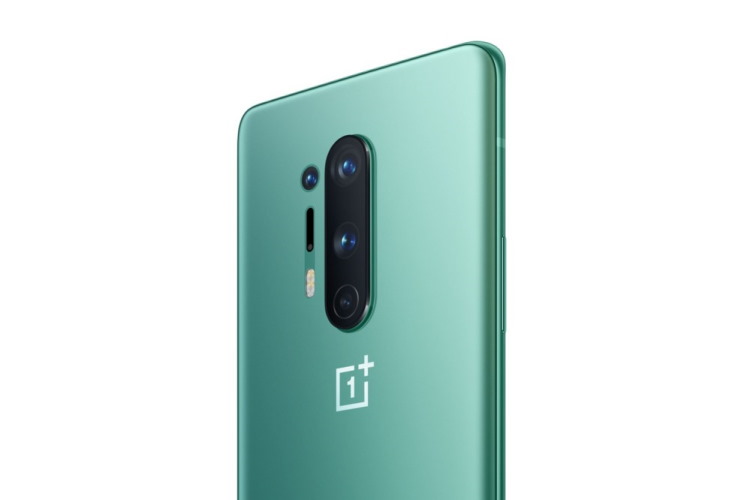 OnePlus 8 Pro is rumored to feature a quad-camera system with two 48MP sensors. It’s going to incorporate a primary 48MP (f/1.78) Sony IMX689 sensor that we recently saw make its debut on the Oppo Find X2. This will be coupled with an ultra-wide 48MP (f/2.2) Sony IMX586 sensor with a 120-degree FOV, an 8MP telephoto lens with 3x optical magnification, and finally, a 5MP depth sensor.

In the official marketing image above, you can notice that there’s also a dual-LED flash and laser autofocus next to the three-cameras on the back. There’s currently no info on which lenses are optically stabilized. Further, OnePlus is said to have invested heavily in the camera department but it’s something we will be able to test out once we get our hands on the device.

OnePlus 8 Pro will probably be the company’s first smartphone with an official IP rating. The device is said to carry an IP68 rating, which means it will officially be more water and dust resistant than before. The non-Pro variant is expected to have an IP53 rating.

Finally, the device will be backed by a 4,510mAh battery with a Warp Charge 30T adapter – same as its predecessor, the 7T Pro. This may come as a disappointment for some as we had expected OnePlus to finally debut its own version of SuperVOOC with this lineup.

It’s expected to be a 5G-backed mid-range phone, taking on the likes of Nokia 8.3 5G and Mi 10 Lite 5G. OnePlus Z is rumored to be backed by either the latest MediaTek Dimensity 1000 or Snapdragon 765G chipset, coupled with up to 8GB RAM and 256GB storage.

The device will feature a flat AMOLED display with a center punch-hole and a 90Hz refresh rate, as opposed to the curved display on the flagship models. You will find a triple camera array on the rear, including a 48MP primary sensor, a 16MP ultra-wide lens, and a 12MP telephoto lens.

OnePlus Z may come equipped with a 4,000mAh battery with 30T Warp Charging support. Since this will be a mid-range device, we don’t expect it to support wireless charging but it’s the one thing that may set it apart from competitors if included. All three phones will obviously run the latest version of OxygenOS 10 based on Android 10. It will most likely come with a new Always-on Display (AOD) feature out-of-the-box.

OnePlus CEO Pete Lau has already confirmed that even the top-end versions of the new OnePlus 8 series won’t cost over $1,000 in the US. The phones will definitely be priced a notch higher than the previous-gen model, thanks to the exorbitant price of Qualcomm’s Snapdragon 865 chipset (including the 5G modem) and IP rating.

You can expect the OnePlus 8 to start somewhere around $600 (around Rs. 45,000) while the 8 Pro will most likely be priced starting at $850 (around Rs. 65,000) in the US. There is currently no official word on whether OnePlus Z will debut alongside the OnePlus 8 lineup or not. Hence, there are no pricing leaks available for this mid-range device but if it’s priced rightly – around the $350-$400 (around Rs. 27,000) then it could be ‘the’ flagship killer to beat. What are your thoughts on the OnePlus 8 and 8 Pro? Let us know in the comments below.

Opuru Joy
Your challenges either make you a BETTER person or a BITTER one, but they can never leave you as the same person. Challenges are 5% of life. Your reaction or response to challenges are the other 95%. Dont let 5% ruin 95%. Stay BLESSED, not STRESSED, Tech report thrills me, Tech report makes me feel better in this world of technology... All Tech News is the best tech zone.
Previous articleHow to Use Walkie-Talkie on Apple Watch
Next articleHow to Use Walkie-Talkie on Apple Watch

Samsung about to discontinue the Galaxy Note line

0
What started as a far-fetched rumor back in August has only gained more traction in the past months and now it looks just about certain that Samsung will...
Read more
Mobile Phones

0
vivo announced the V20, V20 SE, and V20 Pro 5G in September. The vanilla V20 and SE models already made their way to India since and today the Pro variant joins them. The...
Read more
Mobile Phones

Samsung – They CONFIRMED It

Android 11 Overview – Everything you need to know

0
Android 11 Overview - Everything you need to know... Discover all the most important stuff about Android 11! We deep dive into the OS now...
Read more
Tech News