During the Mi Fan Festival 2020 live stream in China, where Xiaomi celebrated its 10th Anniversary with the launch of 22 new products. But, the one that we are most eager to check out is the Redmi Band. The first-ever Redmi Band has finally arrived with a color display, heart rate monitor, vibrant straps, and well, an affordable price tag. 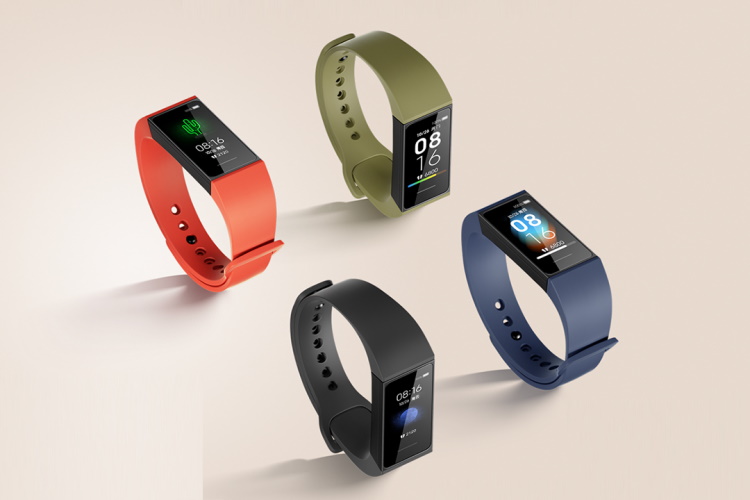 Starting off with the design, Redmi Band closely resembles the popular Honor Band and Realme Band. The pill has now been replaced with an integral central unit, which comes equipped with the charging mechanism – similar to the aforementioned bands. You can simply pull off the straps and plug the central unit into a USB-A port to start charging your Redmi Band.

Redmi Band features a bigger 1.08-inch color AMOLED touchscreen in comparison to the 0.95-inch panel on Mi Band 4. The rectangular design, as opposed to the previous-gen rounded pill, now gives the company more area to work with.

Though NFC is missing onboard, which is understandable at this price point, you do get a heart rate sensor for keeping track of your heart rate and sleeping cycles. There’s a slew of sport modes such as outdoor running, treadmills, walking, cycling, and others baked into this fitness band. You also get sedentary alerts, reminders, and more in tow as the software remains the same as Xiaomi’s Mi Band.

Finally, the company promises a battery life of 14-days on a single charge, which is not at all bad for a budget fitness tracker. This is something we will have to test out to know better. Redmi Band is not only the first Redmi-branded wearable but it is also the most affordable wearable from Xiaomi to date.

The Redmi Band has been priced at 99.99 yuan (around Rs. 1,099). But, It will first go up for crowdfunding from April 9, at an introductory price of 95 yuan (around Rs. 999), in China. There is currently no word on whether the Redmi Band will land in India or not but we hope it does. We are really looking forward to testing it out.

alltechng
Technology is making life more meaningful, improves productivity... We are tech lovers...
Previous articleEdge Vs Chrome Vs Firefox Vs Brave Speed Test | 2020
Next articleWays to Screen Mirror iPhone to Any TV

0
RTX 3070 delayed...What is Nvidia up to? The Flagship Killer Smartphone is BACK iPhone 11 Pro Max vs Galaxy Note 10 Plus Full Comparison! Galaxy Note 20...
Read more
Video