The Galaxy M01 was unveiled earlier this month but Samsung is also working on a M01s. It has been certified by the Wi-Fi Alliance and the Bureau of Indian Standards (BIS) already and now it has bagged TUV Rheinland certification as well, which reveals the smartphone will pack a 3,900 mAh battery. 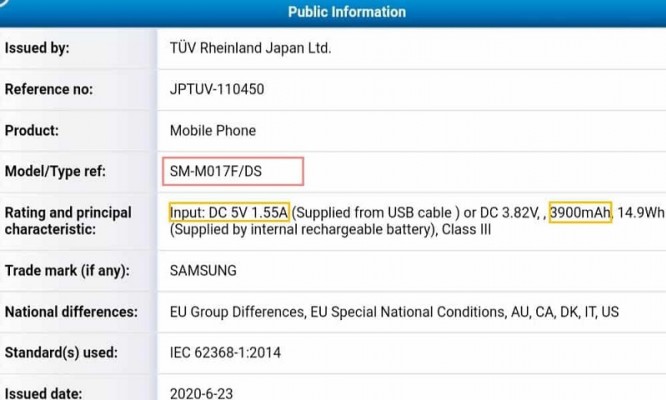 The listing on TUV Rheinland’s website doesn’t reveal any other specs of the Galaxy M01s, but the smartphone passed through Geekbench back in May, revealing its key specs in the process – Helio P22 SoC, 3GB RAM, and surprisingly, Android Pie. We are hopeful the retail version of the Galaxy M01s will run Android 10 out of the box since the M01 also boots the latest version of Android.

Details about the Galaxy M01s are scarce right now, but we should hear more about it in the coming days or weeks.

alltechng
Technology is making life more meaningful, improves productivity... We are tech lovers...
Previous articleHonor X10 Max 5G is scheduled for official announcement in the second half of next week
Next articleThe Huawei P20 is receiving Android 10 with EMUI 10 in Canada

iPhone 12 vs iPhone 11 Pro Max Which is better?

0
12 COOLEST Smartphone Gadgets On Amazon (2021)... With smartphones becoming the most important gadget of the century, it’s only sensible to enhance the functions of...
Read more

Upgrading iPhone X with 3000mAh Battery 🔋😲 SUPERCHARGED – This is Why