No matter how much you sanitize your hand, it all gets washed out as soon as you touch your filthy smartphone. According to a report, that smartphone in your hand or pocket has around 25,000 germs and bacteria per square inch. For context, a toilet seat contains 1,200 germs per square inch. So, with the aim of keeping smartphones clean, Samsung is planning to introduce a new program to disinfect users’ smartphones in any of its service centres.

This program by the South Korean smartphone manufacturers will apparently allow users to visit any Samsung service centre around the world to clean, sanitize and disinfect their smartphones free of cost.

Now, it is important to note that conventional phone cleaners, the ones that come in spray bottles, are not much effective in killing the germs and bacteria. Moreover, it may damage the components inside the device. So, Samsung will reportedly use the UV-C light for the disinfection process. The UV-C light is the one that is used in the “Phonesoap” that we covered earlier. Now, scientifically speaking, the UV-C is a great killer of harmful microorganismsbecause of its shorter wavelength.

Well, it is not yet confirmed if the program is live yet in any of the stores. Samsung apparently added a webpage on their official website about the program commencing in Malaysia. However, the webpage was later removed by the company. 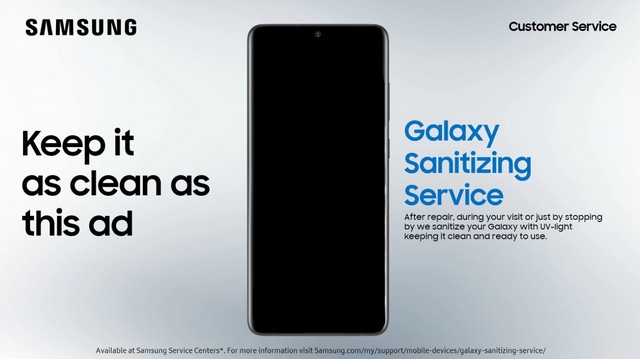 The Korean tech giant has its service centres spread around 19 countries. And according to Sammobile, the company will be providing this free service to all of the countries.

Pauline A . E
Be the change you want to see in the world...
Previous articleFully Functional Apple-1 Computer Hand Built by Apple Co-founder Steve Wozniak Sold at Auction for $458,711
Next articleAdvanced iPad mouse / trackpad support!

Why does nobody buy LG Smartphones?

0
Why does nobody buy LG Smartphones?
Read more