WhatsApp frequently adds features to its widely popular communication app. Back in October, it was rumored that WhatsApp was testing a new feature called “Disappearing Messages” but its function wasn’t clear until now.

The feature has been spotted again in the latest version 2.19.275 of WhatsApp Beta for Android and we have a better understanding of its purpose. The feature has since been refined and renamed to “Delete messages” and lets the users messages expire after a selected amount of time, either an hour, day, week, month, or year. 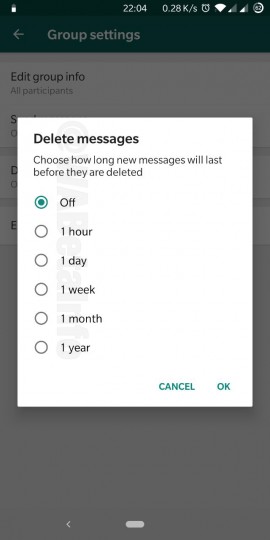 As per WABetaInfo’s findings, the feature is intended to keep group message conversations from taking up too much storage on smartphones. To be fair, there could be other reasons to use the feature. ‘Delete messages’ for a group chat is only accessible by the group chat’s administrator so the setting would apply to all participants of the group chat.

Opuru Joy
Your challenges either make you a BETTER person or a BITTER one, but they can never leave you as the same person. Challenges are 5% of life. Your reaction or response to challenges are the other 95%. Dont let 5% ruin 95%. Stay BLESSED, not STRESSED, Tech report thrills me, Tech report makes me feel better in this world of technology... All Tech News is the best tech zone.
Previous articleNext-gen Huawei Mate X is launching in the second half of 2020
Next articleLG Neon Plus incoming with dated looks, render reveals

0
Federal University Dutsinma, FUDutsinma Acceptance fee payment and registration procedure for all newly admitted candidates in the 2019/20209 session have been published. The procedure...
Read more
Video

iOS 14 Picture in Picture – How To and Tips