WhatsApp moves forward the date to accept its new terms…

WhatsApp has announced that it is moving forward the date to accept its new terms and conditions to May 15. The previous date for this was February 8.

The company says this is due to all the confusion and misinformation around their latest update and that they are going to use the time to clear up the misinformation around how privacy and security works on WhatsApp. They will then go to people gradually to review the policy at their own pace before May 15.

Thank you to everyone who’s reached out. We're still working to counter any confusion by communicating directly with @WhatsApp users. No one will have their account suspended or deleted on Feb 8 and we’ll be moving back our business plans until after May – https://t.co/H3DeSS0QfO

Earlier this month, WhatsApp started popping up its new terms and privacy policy screen when you launched the app. The screen asked users to click Agree and accept the new terms, which will take effect on February 8. You could dismiss the popup but you would need to agree to them if you wanted to continue using the service after February 8.

This caused a mass panic among users, with many choosing to switch over to Telegram and Signal. A lot of it was fueled by misinformation and hysteria, as few people seemed to have actually read the new policy changes.

As WhatsApp has repeatedly said since announcing the new policy, the new changes affect only those who interact with WhatsApp Business accounts on the service. These Business accounts can now use Facebook hosting services to manage their WhatsApp chats, use Facebook branded commerce features such as Shops, and display an ad on Facebook to message the business directly on WhatsApp. In each of these cases, Facebook will now collect information on you if you interact with these business and their ads, similar to clicking any other ad on Facebook. 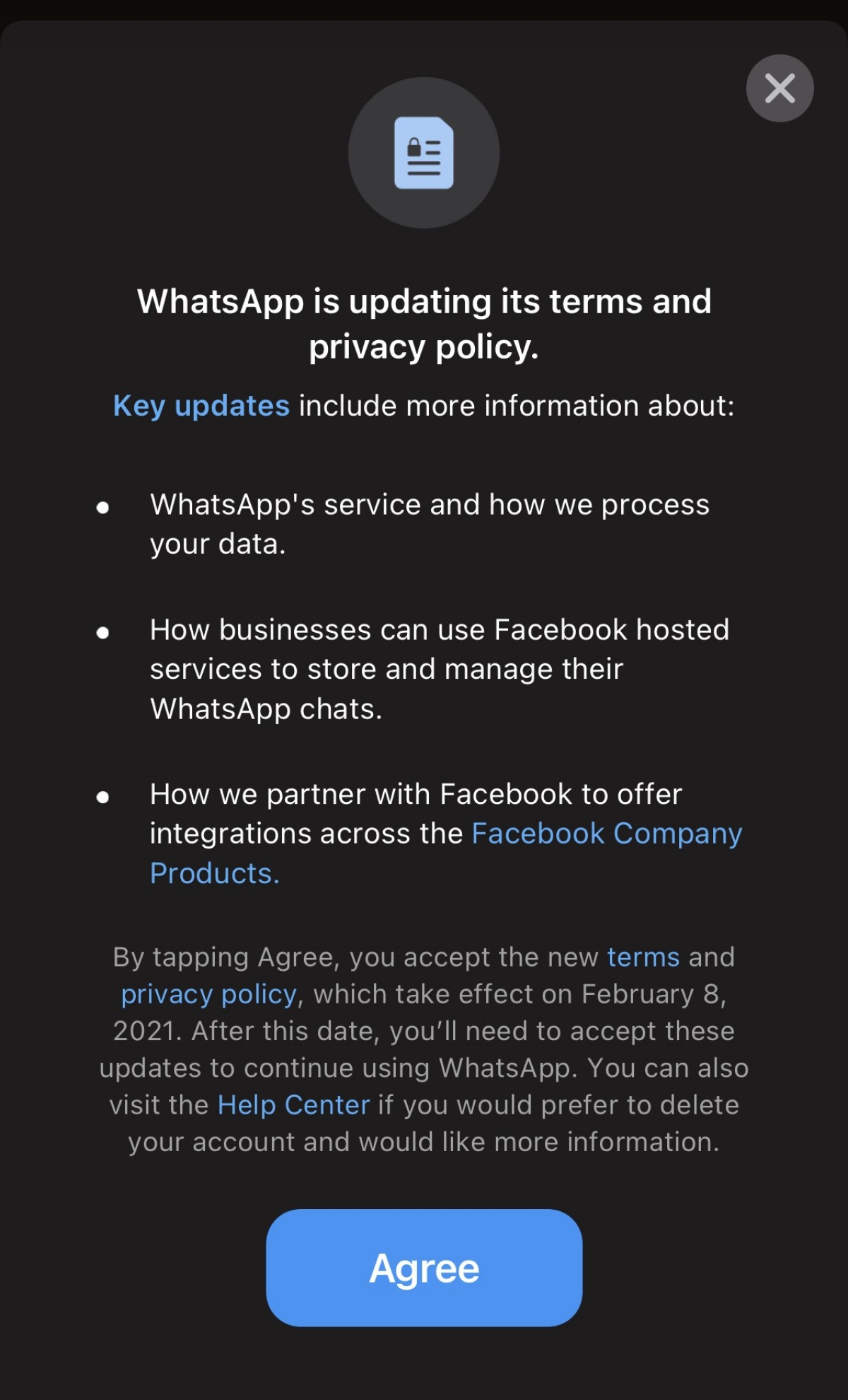 WhatsApp says the new policy doesn’t change anything about users messaging or calling other users or groups, as those terms haven’t been changed. Your messages and calls will continue to be encrypted and your messages won’t be stored on Facebook’s servers. It’s not that WhatsApp doesn’t share any data at all with Facebook; it’s just that the amount of data shared isn’t changing with this update. Basically, if it wasn’t a problem for you before, it shouldn’t be now.

Of course, most people don’t even know WhatsApp is owned by Facebook, let alone they share data with them, so it wasn’t surprising that they panicked when the popup message appeared and essentially told everyone that they need to start sharing data with Facebook or stop using the service. Some people even assumed their accounts will be deleted after February 8, which of course isn’t happening.

Anyway, Facebook isn’t changing its policy. The company is stressing the new changes are only relevant to those who interact with Business accounts and don’t impact other users. So it’s just extending the date forward, likely hoping people would have forgotten about this by then and be more willing to click that Agree button.

0
Google Pixel 6 - IT'S TIME... Google Pixel 6 must have a big and better camera sensor in order to compete with the competition. Google...
Read more

Huawei HarmonyOs – THIS IS GREAT

0
Huawei HarmonyOs - THIS IS GREAT... So Huawei is all set to release the beta version for harmonyOs on dec 16, and a new report...
Read more
Video

Steps To Avoid Getting Hacked On Your Smartphone

0
The Federal Ministry of Transportation has revealed that it is considering zero import duty on new vessels, parts for ship building and repairs following...
Read more