The Wi-Fi Alliance certified a curious phone from Samsung, the SM-F415F/DS. The first “F” stands for foldable – the original Galaxy Fold is F900, for example, the Z Flip is F700. Since the Fold is the premium offering and the is more affordable (though still premium), what would a 400-series device be like?

We’ll resist the temptation to call this a mid-ranger as foldables cost more than non-folding phones – that’s the price you pay for cutting edge tech. However, if Samsung could get close to $1,000, things could get interesting.

Note that the “1” (the second digit) in the model number denotes a second generation device, so this isn’t just a warmed over first-gen product (the Z Fold2 is F91x, but the new Z Flip 5G is still F70x). 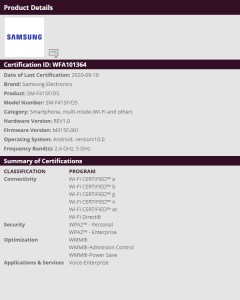 Wi-Fi certification for the SM-F415F/DS

There’s not much more info to extract from this aside noting that there’s no support for Wi-Fi 6 (ax). That doesn’t mean much necessarily, though it could point to a non-flagship (or at least older generation) chipset.

The million dollar question is this – which way will the F415 fold? The premium Fold goes for tablet-like screen size while the Flip folds vertically for compactness. We can see how Samsung might want to keep larger screen size as a premium feature. Still, this might be the Galaxy Fold Lite, which is reportedly targeting a $1,100 price point.

0
The Sony Xperia 1 III cell phone was declared more than two months prior, with vows to be dispatched "toward the beginning of this...
Read more