The Xiaomi Mi 10 unveiled last week generated over CNY200 million in its first sale and was out of stock within seconds. The Mi 10 Pro now had its first sale, which lasted just 55 seconds.

Like the vanilla Mi 10, the Pro variant also garnered over CNY200 million in its first sale, meaning the company sold between 33,300 to 40,000 units depending on their memory configuration. 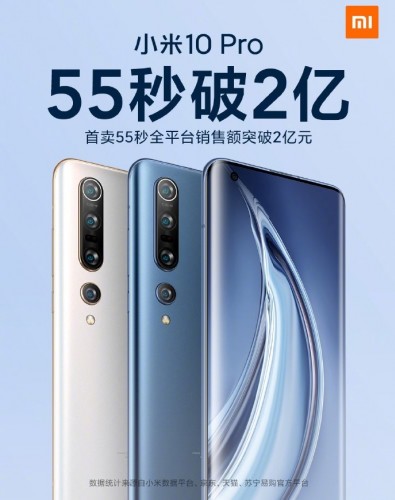 Xiaomi hasn’t revealed when the Mi 10 Pro will go on sale again in China, but looking at the current situation in the country, the company is likely to face a shortage of the Mi 10 duo and it remains to be seen how it copes up with the demand.

Pauline A . E
Previous articleRealme X50 Pro is shaping up to be a true flagship
Next articleTop 6 Performance Phones You Can Buy in February 2020

0
Vivo introduced the Vivo S6 5G smartphone in China. The device has a quad camera with support for shooting in 4K and a battery...
Read more
Tech News

0
Apple, like a lot of other tech companies across the world, has embraced the work from home culture in the wake of coronavirus pandemic. Apple...
Read more

0
According to report, Lyft is removing several thousand electric bikes from service in its bike-share program in New York, Washington and San Francisco because...
Read more
Video